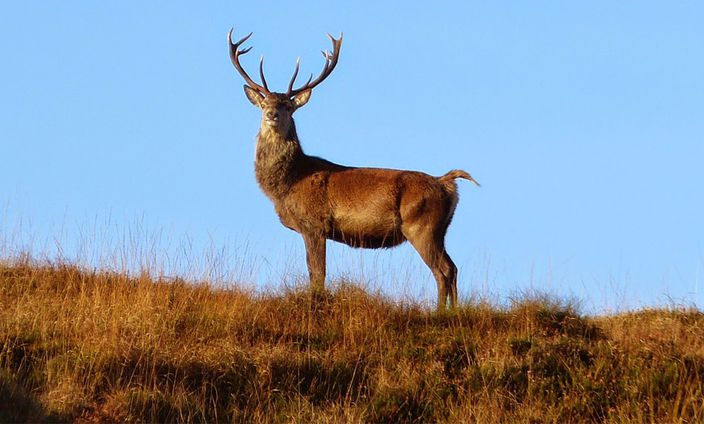 Venison – The story behind the game

Venison was originally described as the meat of any game animal killed by hunting. The term was used for animals belonging to families of deer, hares, wild pigs and certain species of goats and ibex.

Over the years, the term ‘venison’ has restricted itself to the various species of deer. The most common species of deer’s found in the UK are Red, Fallow, Sika, Roe, Red/Sika Hybrid, Chinese Water Deer and Muntjac.

Wild venison is sometimes described as the clean, healthy red meat. Compared to beef, venison is not only lower in fat and calories, but higher in trace elements like iron and vitamin B. The meat has a fine, close grained texture and very little marbling. Since venison is low in fat using bacon or oil based marinade helps to add extra moisture. Venison is best served pink.

We source our Scottish venison from Simpson Game Ltd. The hunting season for Red deer in Scotland is July 1st – 15th February.

Red Deer are native species which colonised in Scotland around 10,000 years ago and have survived since then, mainly in the Scottish highlands. Before 1960 deer were classed as vermin due to the damage they caused to the forest industry. But now the species are a popular food and the main attraction is that the meat is low in fat.

Where to buy venison?

Our venison is from wild red deer from Scottish estates, which have grazed freely on a mixed diet which gives it the wonderfully woody, almost fruity flavour. Steaks are hand trimmed by our master butchers here in Linlithgow. We provide a wide variety of venison meats, which include delicious venison steaks, venison loin (for roasting), venison mince (for pie’s) and diced venison.

How to cook venison?

We’ve got the perfect recipe for you to try venison – This recipe is sure to convert you!