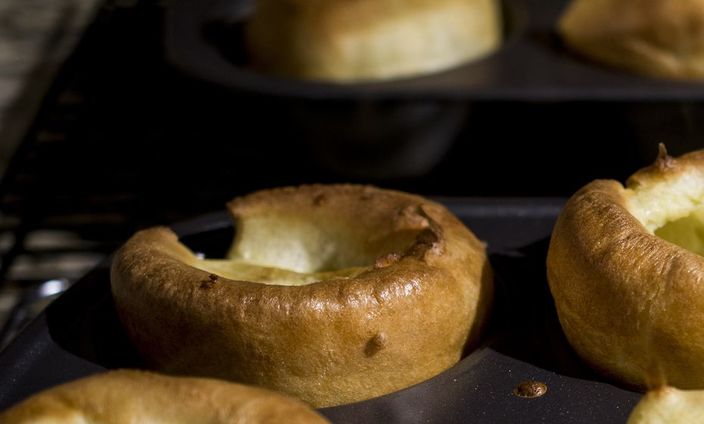 History of the Yorkshire Pudding

The United States celebrates National Yorkshire Pudding Day on October 13th, but the British National Yorkshire Pudding Day takes place on the first Sunday in February and is a recent fixture of the British Food calendar having only just begun in 2007. However, the Yorkshire Pudding actually dates back much further than this, when cooks in Northern England realized they could use fat from meat that was cooking to make a side dish. Traditionally a dripping pan was placed under a roast to collect any fat that came off the meat when cooking. This eventually led to people making a savoury batter that was cooked in this fat, which meant a side dish to accompany the meat could be made at the same time. This was known as a ‘Dripping Pudding’.

It is a little unclear as to when exactly this process came about, but the first mention of the process is in 1737, in a little known anonymously written book called The Whole Duty of a Woman, which as well as providing ladies lessons in contemporary etiquette also contains a variety of recipes that were popular in Britain at the time. The book describes the above technique and that the pudding and meat should be served hot at the same time. It is not until 1747, ten years later, that the term ‘Yorkshire’ appears in relation to the pudding in Hannah Glasse’s The Art of Cookery made Plain and Easy. The Yorkshire pudding remained in popularity as it was a way of using cheap ingredients to create a very filling meal. Sometimes, only the pudding and gravy would be served if meat was too expensive.

These days Yorkshire Puddings are usually made from using baking pans, or even muffin tins. They are still incredibly popular, with a recent survey of 60,000 British people putting the Yorkshire Pudding at no.10 in things they love about the U.K. There has also been some controversy as to what exactly constitutes a Yorkshire Pudding, with the Royal Society of Chemistry declaring that to be considered a Yorkshire Pudding it needs to be at least four inches tall.

The key to a Yorkshire pudding is to have equal parts of all the main ingredients, flour, milk, and eggs. Beyond that, the other key is to make sure the oil or fat in the baking trays you are using is extremely hot. You really want to hear that sizzle when you pour in the batter! The high heat means that the puddings will rise extremely well.

Method:
• Preheat your oven to 220C/Gas Mark 7.
• Put your tin in the oven, with each compartment containing a bit of oil or beef dripping.
• While the tin and oil/beef dripping is heating up, mix your flour and salt together, then add the eggs and mix, then ass the milk and whisk until you have a smooth batter.
• Take out the tray from the oven, and in each compartment pour equal amounts of the batter.
• Put back in the oven and cook until risen and golden, about 20 minutes.